This page is evolving over a period of time.  Eric Allaby is contributing a series of bulletin inserts outlining the various ways that people can become involved at CLC.  They will be added to this page following their completion.

Some areas of involvement will represent needs during our gatherings, however, our focus remains outside the walls of the church.  Several years ago we decided that we would become as involved in our community as we possibly can.  We encourage our folks to find efforts, initiatives, existing programs within the community and jump in relationally.  Accordingly, we intentionally avoid over programming.

Please revisit this page and as it grows we will attempt to further outline our vision for the Kingdom to come among us on Grand Manan Island. 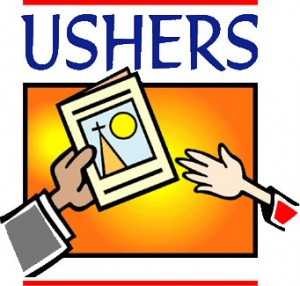 Many years ago, when church was more formal, “ushers” would guide people to a pew and seat them there. Then later in the service, they would take up the offering. Now, their only function is to take up the offering, but they are still called “ushers”.

Not a difficult job at all; mainly an usher needs to be pleasant and not make someone feel uncomfortable if they are not putting anything in the plate. Some people give their tithes and offerings through “automatic deposit”, straight from their bank account to the church bank account. Others write one cheque a month for their tithe to the church; others simply don’t have money to give.

For some reason (tradition perhaps), people seem to think that only men can take up the offering. This is really quite a ridiculous notion, but I am sure many women would feel uncomfortable taking up the offering since the tradition has been around so long. Any woman who would like to lend a hand at taking up offering would be very welcome to.

This role can also be performed by boys and girls, as long as they are mature enough to follow the directions with a pleasant manner.

We have a few men who take up offering regularly, and in the Newsletter, an attempt is made to schedule the “ushers”. However, with people coming and going, it is rare that the ushers listed are actually the ones taking up the offering.

Perley usually looks after making sure two people will take up the offering, so if you (men, women, boys and girls) would be willing to do this from time to time, let Perley know, and he will have a list to draw from each Sunday, depending on who is here and available.

It would be nice to have men and women, boys and girls, all feeling very comfortable working together to do the various things that help to make a Sunday morning a wonderful experience for all of us. 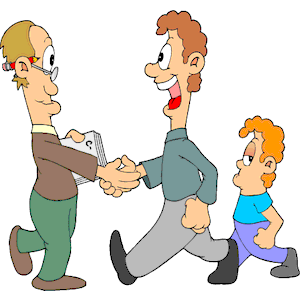 In recent “Round Table” we talked about different things we do around the church, things that are now done by a few, where others, if they knew about it, might be interested in helping and enjoy being involved. Last week we had an insert describing “ushers”, this week we talk about “greeters”

Each Sunday, people coming into church are welcomed warmly and given a copy of our “newsletter”, often with a hug. Our greeters work in pairs, to keep each other company and make it easier to greet if several people are coming in at once. Our greeters start at about 10:15 and greet people until worship starts at 10:30. Sometimes one or both will stay right there by the door into the service in case some arrive a little later.

Our greeters help people to feel welcome when they come into the church, to feel encouraged. And it’s a funny thing: when you focus on making other people feel welcome and feel special, it makes you feel good too. Blessing others also blesses the blesser.

If you enjoy talking with people and think you might like to try being a greeter, talk to any of those who now take their turn greeting, and they can tell you what they do and what they like about being a blessing to others in this way.

This might work better if you and a friend decided to do this together. A husband and wife team works well; ask Bonnie and Perley, as they enjoy ministering to others together this way. Or perhaps a mother and daughter team might work, or father/son; or a couple of friends who enjoy doing things together.

If you feel shy, or are afraid you might not get it right, why not join with the greeters on a Sunday morning and see how it feels.

You might be pleasantly surprised at how blessing others with a warm greeting will also pour an extra dose of joy into your own morning!

So give it some thought, and give it a try! 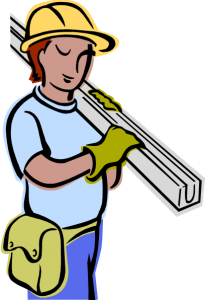 Our church family looks after a large building (the church) and a house (the parsonage). If you have a house, you know that there is always something that needs attention; needs to be fixed or replaced. It’s the same with a church, and perhaps even a little more so, because the building is larger, probably older and is used by a lot more people.

We have a small team of people the “Property Management Team” that have taken on the responsibility of keeping our property in good order. Vince heads up property management, but being a lobster fisherman, he is at sea much of the time and needs help.

Anzonette plays a key role in property management; you might say she is the “administrator” of the team. She’s the “go-to” person if you see something on the property that needs attention. She keeps a record of everything that needs to be fixed, and notes when it is fixed so we have a record of what is being done in property maintenance. If it is a plumbing problem, she knows who can fix it, if a bulb is burned out in a high ceiling, she will find someone who is not afraid to climb a tall stepladder. And someone like Gene, who is handy with a hammer and a drill, is always willing to pitch in when called.

But we can always use extra hands to keep things in the church and parsonage in good order. If you would like to help out around the church in a very “hands on” way, we would love to have you get involved in the practical ways that interest you. Lots of us like working with our hands; if that describes you, then why not put your handy talents to work helping to keep our church property “shipshape”.

If you would like to help, talk with Anzonette and let her know the sorts of things you might be able to do. And you might ask her what sorts of things she needs to have done, and you might find a way to plug in and feel the satisfaction of helping in a way that feels good to you.

It could be anything, from changing light bulbs, to fixing a hinge or latch on a door, to fixing a sticking flush handle. Just like with a house, you never know what will need attention, but it seems that something always does.

If being part of “property management” sounds like an interesting way to serve at CLC, we would just love to have you get involved.